Learn about our BS in Cyber Security Engineering 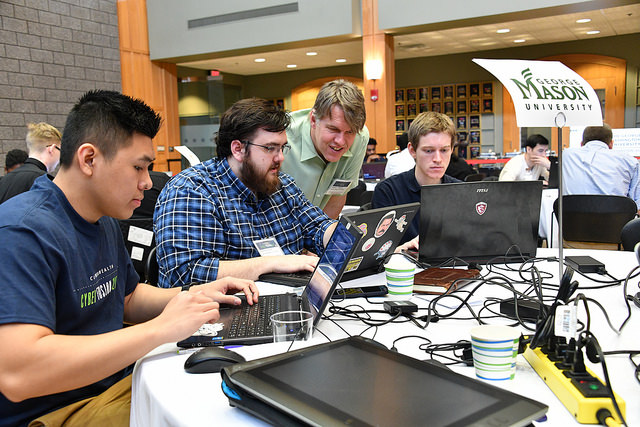 “The best part of the conference was actually getting to solve unique technical challenges. The competition required us to use the technical skills we have, to solve challenges that were new to us,” said Doreen Joseph a student, majoring in Cyber Security Engineering at Mason.

Cyber ranges function like shooting ranges and help with training in weapons, operations, or tactics. A cyber range is a virtual environment used for cyber warfare training and cyber technology development.

Students majoring in Cyber Security Engineering take many classes and gain skills to solve new problems that they will encounter in this ever-changing field. Their coursework, combined with competitions like this, allows them to apply knowledge directly to new situations.
Nine colleges competed in the inaugural event. Each invited college brought one team of up to six students, plus another five selected student observers. Teams from Virginia Tech, JMU, and Radford were among the competitors, but this was the first time Mason students had done anything like this.

“I am so proud of our team,” said Peggy Brouse, director of Cyber Security Engineering. “Considering that this was our first competition and one of the laptops stopped working at the beginning of the four hours, I was very happy. The participant team (six students) placed fourth out of nine teams. The observer team (five students) took third place. “

“The most important thing I learned is to avoid overanalyzing challenges because sometimes, the answer is right in front of you hiding in plain sight,” said Joseph.

Joseph said she thought the team’s biggest challenge related to this exact situation. When they tried to decode a Morse code recording, she said she and her team thought they had to convert the sound recording to Morse code. Later, they discovered that the recording was Morse code, so they needed to convert it to text.

“We were especially frustrated because we had solved the challenge up to that last part, but we were stuck. We were overanalyzing it,” said Joseph.

“We learned a few things to do differently next time,” said Brouse. “But the most important thing is that everyone had fun.”

About the conference:
The event, hosted by Virginia Military Institute and sponsored by the Virginia Secretary of Technology and Senator Mark Warner, the Commonwealth Cyber Fusion emphasized integrating technology with policy and intelligence. In addition to the competition, there were speeches by cyber experts and a number of cyber employers who interviewed students for internships and cyber jobs.

The cyber coaches were Dr. Jim Jones from the Volgenau School of Engineering and Cody McMahon from Raytheon.