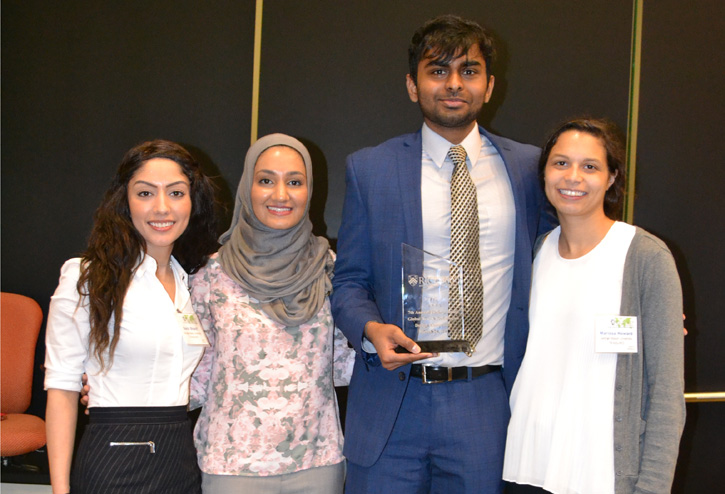 Once thought to be under control, tuberculosis—the infectious, contagious lung disease—is on the rise around the globe. Nearly a third of the planet’s population is affected by the disease, according to figures by the Centers for Disease Control and Prevention, with nearly two million deaths reported in 2015.

Treatment is lengthy, cumbersome and labor-intensive. Detection is limited to skin tests, blood tests and chest X-rays, which are not always available to medically underserved populations.

Both are noninvasive, portable and inexpensive and could upend the way TB is detected—and ultimately treated—around the world.

Howard, originally from Richmond, Va., is the team leader who envisioned the tests. Yusuf, from Alexandria, Va., serves as project manager on the electronic version of the test. Madhu, from Washington, D.C., is the materials lead, helping with the 3-D printing, writing part of the code and helping with testing. Fairfax, Va., native Sharif conducts the intricate and complex testing required to move the project forward.

Meanwhile, team members Yusuf and Sharif were in New York City for the American Society of Microbiology Conference on Tuberculosis. While not a competition, the conference exposed the George Mason team’s efforts to key stakeholders in TB research.

On April 10, the team won one of five research excellence awards and $1,000 at Mason’s Volgenau School Engineering Undergraduate Research Celebration.

In March the four were competitively selected to present at the Rice 360° 2017 Global Health Technologies Design Competition, where they faced 23 competitors from universities around the world and a panel of judges made up of leaders in the fields of global health and diagnostic technologies, Howard said.

“We received great feedback about our project and about George Mason in general,” she said, adding that she plans to complete her master’s degree in biology while continuing to work on the TB project.

While TB Assured is still in development, prototypes have proven to be successful, said the team’s mentor, Alessandra Luchini , the Center for Applied Proteomics and Molecular Medicine professor at Mason’s Science and Technology Campus in Manassas.

“Scientifically, they have all the proof that the test is going to work,” Luchini said.

Lance Liotta, co-director of the Center for Applied Proteomics and Molecular Medicine,  who is also guiding the team, acknowledged that the “project has been transformative for the students and is a highly original strategy for detecting early TB.”