Learn About Diversity at Mason 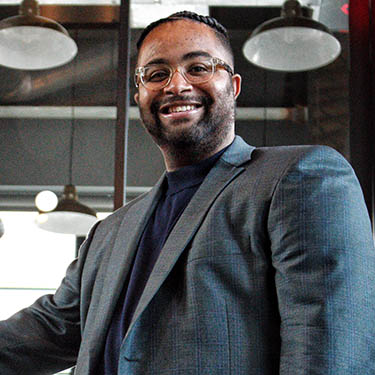 Christopher Carr’s enthusiasm for diversity and inclusion in higher education and STEM springs from his experiences growing up in Missouri, and it is that background that led him to become the first chief diversity officer at the Volgenau School of Engineering.

Prior to coming to Mason, Carr served as the senior director of programs for the National Society of Black Engineers, but at the end of August, he joined Mason Engineering, where he hopes to make a difference in students’ lives. “Growing up where I did, there weren’t many people who looked like me, but my mom and dad were great about giving me every opportunity to be successful,” he says.

His parent's motivation led Carr to a science and math magnet school as a child, but after his first day, his mother found him scrubbing his skin raw in the bathroom. “I told her the kids at school said I was brown because I’m dirty.”

This experience has stuck with Carr, and it set him on his mission to make sure that no child ever feels as lonely as he felt. He has focused his career around that goal. “Schools have to be open enough to allow students in who bring new perspectives and to make them feel welcome and wanted. I hope to help the school of engineering to not only capitalize on the value of having diverse groups and ideas but also to grow into being a part of the diversity-conscious world.”

It was Mason’s already established mission to be an accessible source of higher education that drew Carr to this new role. “Mason has an interesting story to tell. It can bring someone from any background and help them achieve and get a degree regardless of educational background. I want to come in and showcase what Mason is doing well.”

Carr says his father, an engineer, is excited that his son is maintaining a connection to the engineering profession.

Along with highlighting Mason Engineering’s dedication to diversity, Carr wants to start building connections between faculty, staff, and hiring committees to diverse organizations and networks. “I want to give them the tools to find diverse people as part of job searches and other opportunities to reflect the diverse student body.”

“I’m excited about this next step that Dean Ball and the Volgenau School are taking,” says Williams. “It’s really important to have someone in a position to focus on diversity.”

Ultimately, Carr knows that as Mason Engineering expands its diverse faculty and student body and promotes that welcoming environment, the whole school and eventually the engineering field at large will be enriched by different voices and ideas.

“Think about why we enjoy going to a symphony,” says Carr. “It’s not just because of the string section or because the percussion is particularly great, it’s because different skills have been put together to create a wave of sound, and that is what diversity does. It brings different people together and builds innovation.”

“I’m excited about this next step that Dean Ball and the Volgenau School are taking. It’s really important to have someone in a position to focus on diversity.”