The tanker Richard G. Matthiesen navigates the ice of the Arctic while under the command of Capt. Ralph H. Pundt. Photo courtesy of Capt. Pundt of the Maine Maritime Academy, a consultant for the grant.

New trade routes in the Arctic mean unprecedented traffic and industrialization are likely to follow, so George Mason University’s Elise Miller-Hooks and her team of scientists will be taking a closer look at what that will mean for the region’s infrastructure and governance thanks to a $3 million National Science Foundation grant for a project called “An Expanding Global Maritime Network, Its Arctic Impacts and Reverberations.”

Using mathematical modeling and geophysical, computational and social-systems knowledge, Miller-Hooks, a professor in the Volgenau School of Engineering and the Bill and Eleanor Hazel Chair in Infrastructure Engineering, will be joined in the five-year, multidisciplinary endeavor by a cadre of researchers, including Mason professors Celso Ferreira and Sara Cobb, along with Thomas Ravens of the University of Alaska–Anchorage, Anne Garland of Applied Research in Environmental Sciences, Jinlun Zhang of the University of Washington and Capt. Ralph Pundt of the Maine Maritime Academy. The team plans to closely examine a host of issues pertaining to what could be vast changes ahead as world powers converge on the Arctic in search of oil and natural gas, including potential impacts on the environment and current Arctic infrastructure and social dynamics.

“As the Arctic routes open, world trade flows could shift,” said Miller-Hooks. “We hope to understand what that means for different countries, and also what it means for the Arctic and its communities.”

Deborah Crawford, Mason’s vice president for research, innovation and economic impact, said there was a good reason why the NSF designated the project as one of its Top 10 grand challenges.

“On the front lines of climate change, the Arctic is warming at twice the rate of anywhere else on Earth,” she said. “The great work of Drs. Miller-Hooks, Cobb, and Ferreira and their collaborators will shed light on how a changing Arctic impacts world trade flows and supply chains, and how this will affect natural and social ecosystems in the Arctic region. Their work is a fabulous example of multidisciplinary work supported by Mason’s new Institute for a Sustainable Earth.” 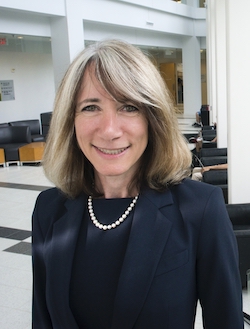 Miller-Hooks and her team plan to estimate the impact expected—both good and bad—that is inherent with a significant increase in people, shipping and infrastructure needs as a result of the world’s increased attention. Increased drilling for oil will pose additional risks to the environment and local fish and animal ecosystems, as well as the people who depend on them for their way of life.

Russia recently announced plans to transport a nuclear reactor to the region to sustain its efforts, and the U.S., China, Norway and Finland, among many other nations, are also increasing their presence in the region.

Commercialization will lead to more jobs, but the influx of people and vessels will also require more infrastructure such as hospitals, roads, fueling stations and deeper shipping lanes for larger sea vessels.

“With growth, we expect conflict,” said Miller-Hooks, who specializes in the study of infrastructure resiliency. “As opportunities for accessing limited resources increase and these routes becoming increasingly accessible, many nations will find increased interest in the region.”

Because of the added risk of pollution and social conflict, Cobb and Garland have already begun working with local communities in Alaska’s North Slope Borough. Cobb, the Drucie French Cumbie French Professor at the School for Conflict Analysis and Resolution and the director of the Center for the Study of Narrative and Conflict Resolution, will be designing a conflict early warning system framework, drawing  on stakeholders’ indicators to head off potential problems early on while supporting local resilience and adaptive governance processes.

Ferreira, an associate professor in the Sid and Reva Dewberry Department of Civil, Environmental and Infrastructure Engineering, will quantify the impact of the region’s melting ice caps that are making the whole scenario possible by predicting storms, waves and measuring storm surge, coastal erosion and rising sea levels on coastal waterways and infrastructure.

“One of our goals,” he said, “is to determine how we can protect coastal infrastructure in a changing Arctic environment.”

Weighing environmental, social and national security concerns will require a delicate balance, but Miller-Hooks said that she and her team are “beyond excited” to get started.

“It’s a new frontier, and an important frontier to U.S. national security,” she said.