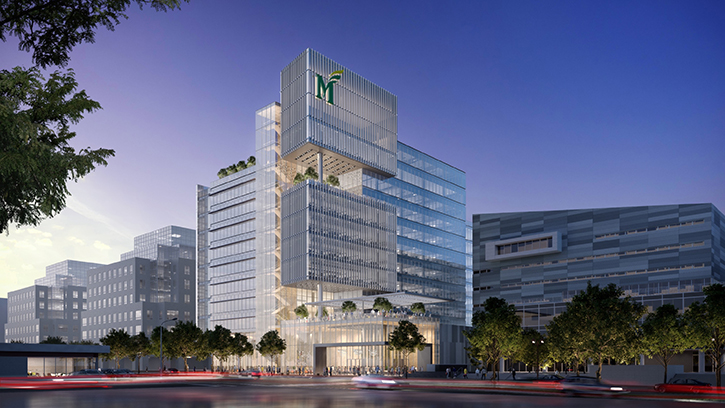 A concept design for the Institute for Digital Innovation at Mason's Arlington Campus.

George Mason University will receive $235 million from the state as part of the Tech Talent Investment Program (TTIP) announced Thursday by Gov. Ralph Northam. The funding will support Mason’s role as a producer of graduates in high-demand fields and spur the expansion of the Arlington Campus.

"This initiative is an investment in Virginians," said Gov. Northam. “Virginia’s tech sector will continue booming only if we can train the workforce those jobs require. With today’s announcement, we are educating a workforce that will fill jobs at hundreds of tech companies around the commonwealth, including at Amazon, helping boost our economy and quality of life in every corner of Virginia.”

Mason Interim President Anne Holton joined Northam and other university presidents at Virginia State University for the announcement. The commonwealth has signed memorandums of understanding with 11 universities as part of the TTIP.

"Mason’s strategic role in the Tech Talent Investment Program confirms our standing as a significant producer of diverse tech talent in Virginia,” Holton said. “We’re grateful to state officials for their confidence in our ability to continue to deliver high-demand tech talent for decades to come.”

The first of two MOUs that Mason has executed with the commonwealth calls for the state to invest $125 million in Mason to produce a cumulative total of 7,538 master’s graduates in tech fields over the next 20 years. This represents three times more graduates annually than Mason produced in 2019. Mason will match that $125 million, for a total investment of $250 million.

The second MOU calls for the state to invest $110 million in Mason to confer 8,410 undergraduate degrees in tech fields over that same period, about one-third more graduates annually than Mason produced in 2019. Mason is not required to match these funds.

In all, Mason will produce about 30% of 25,000 additional graduates in tech fields over the next two decades to serve region and state employers, including Amazon.

The state funding will support the expansion of Mason’s Arlington Campus, which will include the Mason Institute for Digital InnovAtion (IDIA), the anchor of an “innovation district,” inspired by similar districts established around the country by research universities and their partners. Holton said that IDIA and the innovation district will highlight many of the values that have defined Mason’s success over the past half-century—research, innovation, access and diversity—while also contributing to economic growth and job creation along the Ballston-Virginia Square corridor.

The Mason IDIA will draw on the university’s partnerships with private, public and community organizations in Arlington and house Mason’s tech-related research and education programs, as well as incubator/accelerator programs, start-ups, high-growth businesses of all sizes, and academic and community partners.

“The Mason Institute for Digital InnovAtion will bring together more than 200 faculty from across 10 Mason colleges and schools, uniting related research and innovation and producing thousands of career-ready graduates for the innovation economy each year,” said Deb Crawford, Mason vice president for research, innovation and economic impact. “In addition, the co-location of Mason faculty and student innovators with corporate-sector partners speeds the path to commercialization of university-invented technologies, including through start-ups and established companies.”

The university will share more details about IDIA on Nov. 20 at the 40th anniversary celebration of the Arlington Campus, with state officials and Amazon representatives in attendance. That event will kick off the Arlington Forward speaker series for 2020 that will highlight the university’s role in the innovation district project.

Just as the anniversary celebration will reflect the past and present of the Arlington Campus, so does the state support for the project, Holton said.

“The commonwealth’s investment in Mason is an endorsement both of what this university has achieved and what we can accomplish together as we deepen Mason’s impact throughout the National Capital Region and around the state,” Holton said. 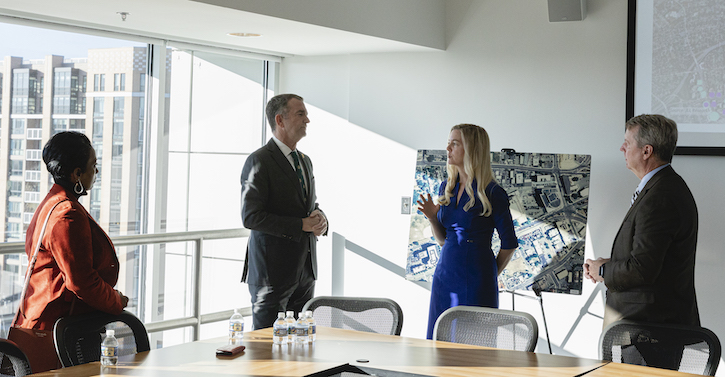 Gov. Ralph Northam met with Mason leadership in October to look at plans for the proposed expansion of the Arlington Campus. From left, Mason Chief of Staff Dietra Trent, Northam, Volgenau School of Engineering Associate Dean for Strategic Initiatives and Community Engagement Liza Wilson Durant and Vice President of Government and Community Relations Paul Liberty. Photo by Lathan Goumas/Office of Communications and Marketing.