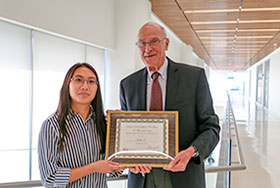 Bioengineering student Holly To (on right) accepts the award from Peter Katona. (Photo by Christopher Bobo)

Holly To’s interest in prosthetics and nanotechnology was what originally brought her to Mason's Department of Bioengineering, but it’s her natural leadership and drive to try new things inside and outside of the department that earned her the Katona Endowed Scholarship for Excellence in Bioengineering.

To, a senior bioengineering major concentrated on pre-health, dreams of going into internal medicine and focusing on pulmonology after her time at Mason, but she admits that when she was first deciding what she wanted to study, she didn’t know what path she wanted to take. “I didn’t really know what engineering was, but I was interested in prosthetics and nanotechnology so bioengineering popped out,” says To.

Since then, she has taken on new roles to learn more about bioengineering and science in general. “The research opportunities at Mason have been great, I’ve been able to do research with the Office of Student Scholarship, Creative Activities, and Research (OSCAR) and in bioengineering. I learn so much from learning about different fields,” says To. She is also the former vice president and current president of the student chapter of the Biomedical Engineering Society.

To is also a peer mentor and says she loves to volunteer in her free time.

It is this drive to try new things that made her stand out to Claudia Borke, the academic advisor for the bioengineering department.

“Holly always stuck out because she never shied away from extra work,” says Borke. “She added on clubs and research, and she is very strict with herself and very organized.”

The Katona scholarship was first given out in 2015 and was established by former bioengineering department chair Joseph Pancrazio to honor the department’s first director, Peter G. Katona.

To got to talk with Katona and department chair Michael Buschmann a few weeks back. She says Katona offered advice on research, graduate and medical schools, and industry.

Borke stressed that the scholarship isn’t just about academic excellence but also about being involved in the department and being a leader, and To fits that bill. “She is a natural leader, she is very compassionate, and she actually wants to help people learn and succeed,” says Borke.

For success, To says it is important to keep an open mind, give 100 percent to everything you do, and be really friendly with professors. "Talk to them about the questions you have during class. You can get so many opportunities from developing a personal relationship with them.”