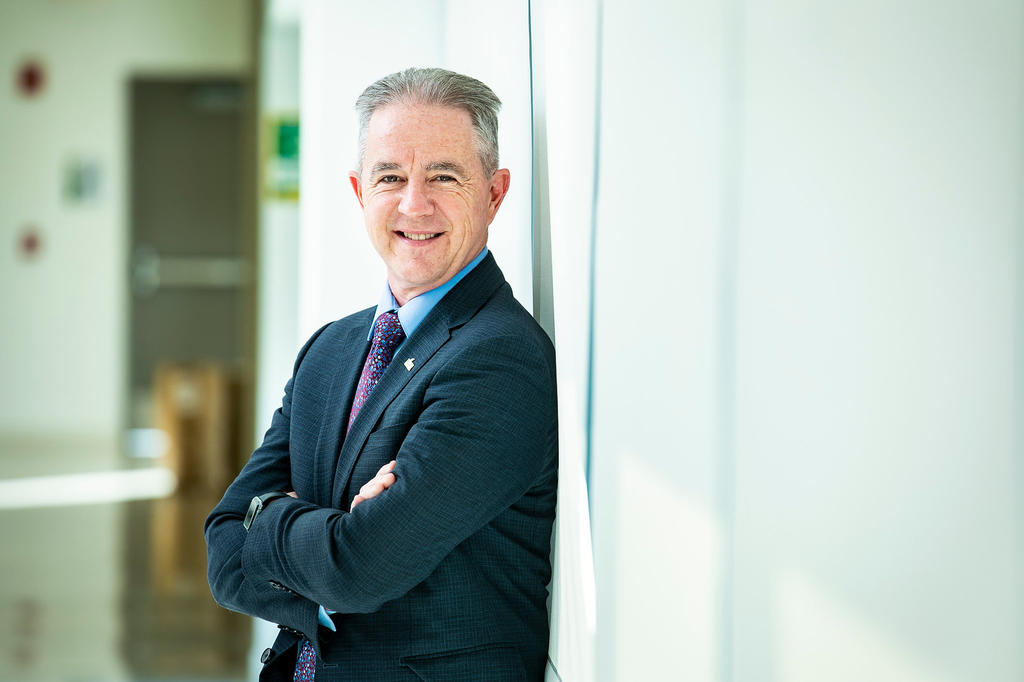 Chief of Staff Ken Walsh says he's impressed with the strength and resilience of the Mason community.

Mason Presidential Chief of Staff Ken Walsh's career is about building bridges. The story of the Brooklyn Bridge inspired him as a freshman engineering student, research on the soil near a bridge over the Salt River near Tempe, Arizona, kept him in graduate school, and his career in higher education has built bridges for students and communities around the world.

"When I started my engineering studies at Arizona State University, I joined the student chapter of the American Society of Civil Engineering (ASCE)," says Walsh. "All new members received a copy of David McCullough's book, The Great Bridge."

Being a history buff, he read the book in a weekend, and it changed the way he thought about engineering.

"After reading the book, I realized that changes to the built environment can change the world. The people who built that bridge made history," he says. "The idea that I could be a part of history through engineering practice inspired me."

After graduating with a degree in civil engineering, Walsh got a job with a local company and worked on projects around Phoenix. "I loved driving around town and seeing the finished buildings that we had constructed," he says. Walsh started taking night classes and says that he planned to take courses to improve his engineering practice.

But another bridge, this one closer to home in Tempe, across the Salt River, led him to pursue his PhD. "During graduate school, I ended up working on a soil investigation project related to a freeway bridge over the Salt River. The soils exhibited unusual behaviors, and while I was studying them my advisor asked me to apply for a National Science Foundation fellowship which would pay for the PhD," says Walsh.

While in graduate school, Walsh continued working, but the small family-owned business that he had been his employer changed ownership and the culture changed. This led him to look for a change of his own.

Walsh saw an ad for a job at Arizona State University teaching construction engineering and decided to take a chance. "At the time I didn't see it as a long-term thing, but I stuck with it until I got tenure," he says. "Teaching allowed me to be part of  even more projects, and my students' advancement and accomplishments gave me great pleasure."

When San Diego State University started its program in construction engineering in 2002, Walsh bridged the gap between teaching and administration. He served as the director of the program which allowed him to have an impact on more students and faculty.

Building this program led to his involvement in building a new STEM-focused campus in Tbilisi, Georgia. The project involved every aspect of running a campus. His team built the program from the ground up, dealt with curriculum, accreditation, and fund-raising, but Walsh says the most rewarding aspect of all was witnessing the potential transformation in people's lives. "I saw the power of higher education, not just STEM," says Walsh.

After the experience in Georgia, he was looking for a place to return home to and the job as Chief of Staff with President Gregory Washington at the Samueli School of Engineering at UC Irvine looked like a good fit. When Washington moved to Mason last summer, Walsh came along to fill the position of Chief of Staff.

It's been a challenge starting a new job with the pandemic, but Walsh says he's impressed with the strength and resilience of the Mason community. It has a supremely balanced perspective," says Walsh. "Teaching, learning, and personal growth are all done here more thoughtfully." He sees a level of understanding of the impact of higher education that you don't see everywhere.