When Paul Cipparone was choosing a major, he saw two choices: film and engineering. While seemingly unrelated, Cipparone chose mechanical engineering, but he still finds ways to channel his creative energy into forging his unique career path and building new skills. 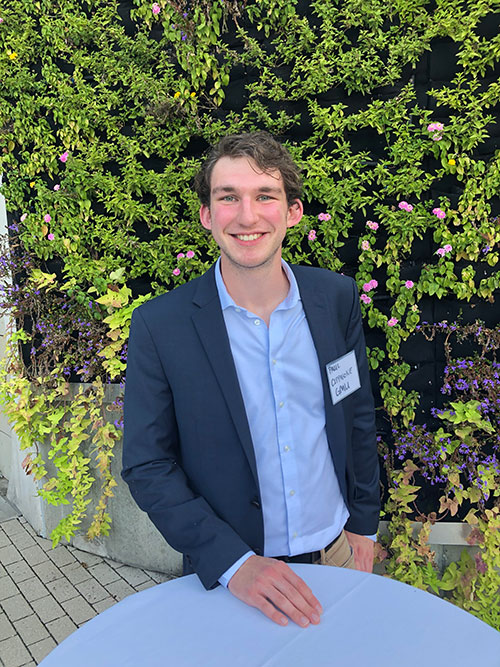 “I chose engineering because I like problem-solving and finding creative solutions and angles to innovate new things,” he says. “Engineering also offers transferrable skills that can be applied to other fields.” But in addition to film and engineering, Cipparone strives to add more of these skills to his toolkit.

Cipparone’s first internship was at the American Society for Mechanical Engineers (ASME), doing policy work. “I knew nothing about policy. I didn’t know how a bill was made or what ASME did in the policy space,” says Cipparone. But he didn’t let that keep him from pursuing the opportunity and completing the internship.

“I’m a big fan of trying completely new things and taking risks.” And if you put in the work, there is a big reward—learning a new skill, he says.

Similarly, Cipparone took a nontraditional route to get an internship at SpaceX this past summer. He saw an article on LinkedIn about getting internships at top companies, and he took a chance and contacted the author. “He said the best way is to reach out to as many people as you can in the sector you want to work in at a company, so that’s what I did.” And SpaceX was his top choice.

A Northern Virginia native, Cipparone always had an interest in space, but SpaceX sparked his interest in the engineering side of space exploration. “SpaceX and Elon Musk’s work with reusable rockets was so new, and it’s something people thought was impossible to do. It is actually what inspired me to pursue engineering,” he says.

So, he got to work reaching out to people at SpaceX and eventually landed a dream role working as a space engineer at the company in Texas. “It was a risk. There were a lot of people who didn’t answer, but it only took one,” says Cipparone.

As for film, Cipparone hasn’t given up. “I’ve had the chance to take some cool film classes while at Mason, and I hope to one day become a filmmaker too,” he says.

Cipparone doesn’t see a limit to what he can learn in his lifetime, and he urges fellow engineers to keep their options open. “I don’t think we need to be confined to one thing, art or engineering. I want to do everything I can.”