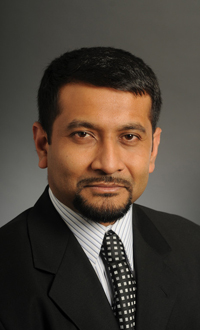 Siddhartha Sikdar is currently a professor in the Department of Bioengineering at George Mason University. He is the Director of the Center for Adaptive Systems of Brain-Body Interactions (CASBBI). This transdisciplinary center includes faculty with expertise in engineering, neuroscience and rehabilitation. The vision for CASBBI is to improve the function and quality of life of individuals living with physical and psychosocial disability through research on mechanisms and modulation of complex adaptive systems underlying human movement and behavior.

Sikdar earned his PhD in Electrical Engineering from University of Washington, Seattle in 2005. He received a postdoctoral fellowship from the American Heart Association. He has been a recipient of the NSF CAREER Award, the Volgenau School of Engineering Rising Star Award, Mason’s Emerging Researcher/Scholar/Creator Award and was nominated for the Rising Star Faculty Award of the State Council of Higher Education in Virginia. His current research is funded by the National Science Foundation, National Institutes of Health, Department of Defense and the Veteran's Administration.