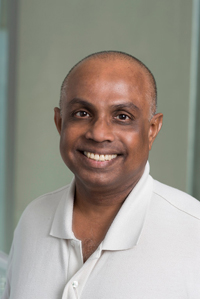 Duminda Wijesekera is the acting chair of the newly formed Cyber Security Engineering Department and a professor in the Department of Computer Science at George Mason University, Fairfax, Virginia and a visiting research scientist at the National Institute of Standards and Technology (NIST). He leads the Laboratory of Radio and RADAR Engineering (RARE) at Mason and currently supports the CCI Nova node director with the CCI Innovation Laboratory at Arlington. He also leads CVS for the Secure Manufacturing Automation (SMA) in the DoE funded CyManII project. His research area includes safety and security of networked control systems in general and Intelligent Transportation Systems (ITS) that includes trains, aircraft and connected/automated automobiles and Industrial Automation Systems in particular, Next G based Edge services for Smart Transportations, Buildings and Cities.

He is a fellow at the Potomac Institute of Policy Studies in Arlington, VA. Prior to joining GMU as an assistant professor in 1999, he was a senior systems engineer in the Military Avionics and Space Systems divisions of Honeywell Inc. in Clearwater, Florida. He has been a visiting post-doctoral fellow at the Army High Performance Research Center at the University of Minnesota. Dr. Wijesekera received a PhD in Computer Science from the University of Minnesota in 1997 and a PhD in Mathematical Logic from Cornell University in 1990.

2014 - 2015 : Using the Policy Machine to Enforce Access to Health Records. Funded by National Institute of Standards and Technology.

2013 - 2014 : Mapping GSM-R Into US Wireless Frequency Intervals for High-Speed Rail. Funded by US Department of Transportation (US.

2014 - 2014 : A Survey and Taxonomy on the Roots of Trust in Cyber-Physical Systems. Funded by Cyber Security Research Alliance.