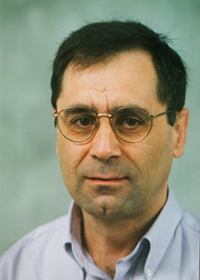 Yariv Ephraim received the B.Sc. Cum Laude, the M.Sc. and the D.Sc. degrees in Electrical Engineering in 1977, 1979 and 1984, respectively, all from the Technion-Israel Institute of Technology, Haifa, Israel.  During 1979-1981 he was a researcher at RAFAEL, Israel. During 1984-1985 he was a Rothschild Post-Doctoral Fellow at the Information Systems Laboratory, Stanford University, Palo Alto, CA.  During 1985-1993 he was a Member of Technical Staff at the Information Principles Research Laboratory, AT&T Bell Labs, Murray Hill, NJ.  In 1991 he joined George Mason University, Fairfax, VA, where he currently is Professor of Electrical and Computer Engineering.  He is a co-recipient of the 1999-2000  EURASIP Best Paper Award;  a co-recipient of the 2020 IEEE Signal Processing Society Sustained Impact Paper Award; and a co-recipient of the IEEE ICC-2021 Best Paper Award. He was elected Fellow of the IEEE in 1994.   From 2006 to 2009 he was Associate Editor of the IEEE Transactions on Audio, Speech and Language Processing.  He currently serves on the Editorial Board of Foundations and Trends in Signal Processing.  Yariv Ephraim's primary research interests are in Statistical Signal Processing.  His recent research work has focused on signal and parameter estimation of partially observable bivariate Markov processes in discrete and continuous time.  His earlier research has focused on the development of parametric and non-parametric minimum mean squared error speech enhancement systems.